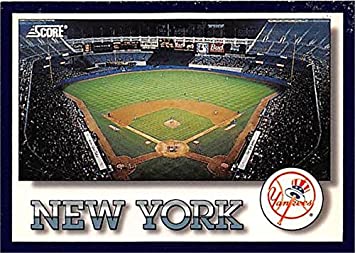 I’ve visited dozens of ballparks in my life. I’ve written about all the current ones in my new book, Baseball Road Trips. Follow me as I share stories about my trips to ballparks across America.

The 2nd Ballpark I Ever Visited: Yankee Stadium II (1993)

On the morning of Sunday, August 22, 1993, my dad drove my brothers and I up to the Bronx. It was my first and only game at the old Yankee Stadium.

It was also my first time seeing the American League in person. This was four years before interleague baseball, so the AL was a foreign concept with power hitters, high pitcher ERAs, bad defense, and a whole new set of umpires. It was like seeing my first PG-13 movie, only it was the pinstripes at the House that Ruth Built. Nothing could’ve been better.

I don’t remember much from the game (someone on YouTube posted an old videotape shot before first pitch), but I think we sat about halfway up and along the first base line. I probably looked at the frieze most of the time, or I was just astonished at seeing a ballpark that wasn’t enclosed completely by seating. Those mammoth signs spanning the outfield that advertised those unusual businesses like The Wiz, Armitron, and Hitachi. Most of these weren’t New York businesses, but they might as well should’ve been, as I’d never before seen such sights.

See, back in the ‘80s and ‘90s stadiums would have local advertisers, or at the very least advertisers that were unique to their ballparks, nothing like the big Budweiser script atop some roof or the Camping World logo plastered on every home plate backdrop. At the Vet in Philly we had the Bell Atlantic Yellow Pages (whose commercials starred the voice of James Earl Jones), soft-pretzel producers Superpretzel, MAB Paints, and Schmidt’s beer, which in the home of Mike Schmidt felt like some elaborate in joke made just for Philadelphians. And sure we’d have the occasional Coca-Cola advertisement, but you always got the sense of exactly where you were watching the game. Philly was the land of MAB Paints. In the Bronx, The Wiz reigned.

The game did have meaning: The Royals were visiting, and star George Brett was playing in his final contest at Yankee Stadium. There was plenty of history to unpack. The fans cheered him, as I recalled, and as they should have. He went 3-for-5 with an RBI as the designated hitter. Also, Chris Haney pitched a complete-game shutout in a Royals’ 7-0 win.

There were three major takeaways from that 1993 visit to the Bronx. One: Yankee Stadium shook. I still remember feeling the vibrations while stomping on the floor, as scary as the quick turns coming off the New Jersey Turnpike for an eight-year-old who couldn’t completely see out the window of the Ford Escort.

Two: I had the dreariest cheesesteak of my life at the stadium. We got it from some vendor and sat at a table somewhat outside, and it was just microwaved salisbury steak and melted American cheese in soft roll. From that moment I knew nobody outside of Philadelphia would make me a cheesesteak as good as one I could have back home.